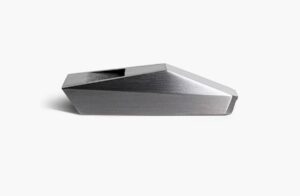 Tesla, via CEO Elon Musk’s Twitter account, has unveiled its latest premium product for diehard fans of the EV brand: a whistle. Yes, you read that right. But more specifically, it is actually called “Cyberwhistle,” because of course.

If its name isn’t on-the-nose enough for you, the product itself actually resembles Tesla’s t-to-be-produced Cybertruck EV (sans the wheels). As a refresher, the retro-futuresque vehicle was originally announced all the way back in late 2019, and is expected to ship out sometime in 2022 – provided that its production isn’t affected by any potential shortcomings.

As for the Cyberwhistle, well… it’s basically a whistle. Aside from the Cybertruck-inspired design, Tesla says it is made from medical-grade stainless steel with a polished finish, and includes an integrated attachment feature for added versatility. It is very likely that the latter is just a fancier way of describing a tool for attaching a lanyard to the whistle.

Along with the product’s reveal, Musk tweeted “Blow the whistle on Tesla,” which may or may not be a tongue-in-cheek reference to recent headlines – especially those concerning Mark Zuckerberg’s social media giant, Meta. Following the post, the maverick Tesla CEO also took the opportunity to take a potshot at Apple and tweeted, “Don’t waste your money on that silly Apple Cloth, buy our whistle instead!”

Don’t waste your money on that silly Apple Cloth, buy our whistle instead!

On that note, the Cyberwhistle is priced at US$50 (~RM210) on the official Tesla online store. However, those who are actually planning to purchase it will be disappointed to know that it has sold out almost immediately after Musk’s announcement. There’s no word whether the company plans to restock the product in the foreseeable future.