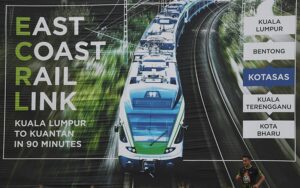 Prime minister Ismail Sabri Yaakob launched the first tunnel boring machine for the East Coast Rail Link (ECRL) yesterday, starting the excavation of the Genting Tunnnel. This tunnel will be linking the Bentong and Gombak stops of the ECRL. Which, according to former transport minister Liow Tiong Lai, will “help to decongest the Karak Highway.

He elaborated that traveling between Bentong and Gombak takes about an hour of driving “on a good day”, but can easily exceed two hours on bad days. According to The Star, the Genting Tunnel for the ECRL can help shorten travel time between the two locations to 28 minutes. This will presumably get more people to use the ECRL rather than drive, reducing the number of vehicles on said highway.

The former Bentong MP also said that the railway will promote ecotourism in the district, and economic growth for the peninsula’s east coast as a whole. That, and many locals were “relieved and happy” that the tunnel boring work for the Genting Tunnel had started.

In a separate report, prime minister Ismail Sabri Yaakob had asked the Transport Ministry to talk to stakeholders to ensure that ECRL ticket prices will be affordable. Comparisons were drawn to KTM’s services, the prices of which were described as “rakyat friendly”.

The ECRL project has quite the history. Started back in 2016, the Malaysian government signed a finance deal and construction agreement with the China Communications Construction Company for the project. Construction would start a few months later in 2017 before getting suspended by the change of government following the 2018 general election. Initially fated to be cancelled, the project’s route was realigned instead. Then came another change of government in 2020, which saw the route change being reverted.

Launched yesterday was the first of two tunnel boring machines which will be excavating the Genting Tunnel. The second machine is expected to be fully reassembled and tested before the year ends.