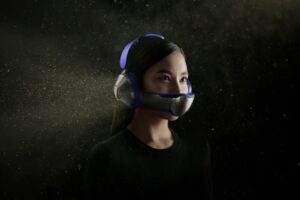 Over two years ago, Dyson was granted a patent that described a pair of headphones with an air purifier built in. It looks like the company has announced a product that’s just like the patent described. And it looks a lot more bizarre as an actual product than a patent diagram.

These headphones purifier combo is called the Dyson Zone. And the company is revealing the item ahead of its fall release, according to The Verge. But as the report notes, the company has not disclosed price or specs as of yet.

The Dyson Zone effectively combines existing headphones tech with its own miniaturised air purifier tech. It works just as the patent from two years ago describes – it sucks in air from the headphone cups using tiny compressors, which is then filtered and pushed out through the mouthpiece in front of the wearer’s face.

Dyson claims that the Zone can filter out up to 99% of particle pollution, but the filters themselves will need to be replaced after about a year. When not in use, you can remove the mouthpiece part of the Zone from the headphones too. It is attached using a series of magnets, so removing it should not be too much of a problem.

You can also flip it down further, allowing you to say a few words to someone before you put it back on. There’s also multiple settings for different levels of exertion. This presumably lets it pump more air to your face when you’re breathing heavily.

The Verge also reports that it has three different noise cancelling modes. There’s the usual ANC, a conversation mode that activates when you flip the mouthpiece down, and a third transparency mode for when you need to listen to background noises like car horns. But the report notes that even with ANC, it doesn’t completely cancel out the sound of the air compressors.

Because of the additional air purifier add-on, the Dyson Zone is not only larger, but also heavier, than your average pair of headphones. We’ll have to wait for details like a spec sheet and its price to determine if it’s really worth getting one over your average pair of cans.