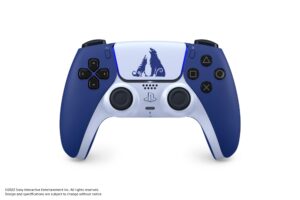 Fans of the God of War reboot are no doubt eagerly anticipating the release of its sequel, Ragnarok, on 9 November of this year. There’s also a special limited edition DualSense controller that will be releasing alongside the game. It’s been a hot minute since it was first revealed during the State of Play broadcast earlier this month, and now, Sony Interactive Entertainment is finally ready to announce the price of the controller.

Though perhaps this time, one can argue that the extra details on the God of War Ragnarok limited edition DualSense make it worth the RM20 premium. There is an overall icy-cold colour scheme, with the indigo-coloured sides with a blue-tinted off-white in the middle. Even the PlayStation button has an indigo outline to it. On the touchpad, it sports prints of a wolf and a bear, representing Atreus and Kratos.

As mentioned, the God of War Ragnarok Limited Edition DualSense will be priced at RM369, and available on the same day as the game, which is 9 November. If you’re looking to pick up a pretty controller, this may be one to consider. That being said, being a limited edition, expect it to either run out quick, or get scalped. On the flip side, beyond the special paint job, it is effectively the same as your regular DualSense controller. And there will probably not be another rerun for when the DualSense Edge controller rolls around.