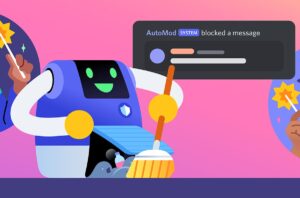 Discord recently introduces a new way to detect harmful content and spam, giving admins and moderators a tool to maintain their server’s safety. AutoMod, the app’s latest feature, is designed to serve moderators in community servers by taking the proverbial load off their shoulders. Enabling them to remove or prevent any malicious scams, language, suspicious links, and spam.

AutoMod does this by monitoring all sorts of daily inconveniences, ensuring the servers are safe and clean. Through it, moderators can also set up “Commonly Flagged Words” by toggling three readily available wordlists designed for protective coverage against the said terms, including insults, slurs, explicit language, sexual content, and absolutely severe, wash-your-mouth-out-with-Listerine profanities.

Additionally, AutoMod can be set up to use up to three custom filters, and add “misspellings” of certain words to the custom rule sets. As an example, if a non-moderator attempts to use flagged words or phrases, they can be Timed Out automatically and will be discontinued from posting, since the component is equipped with keyword filters. Moreover, the filter’s function is extended across any channel threads set by the moderation team. After all, it takes precautions while scanning conversations and identifying anything with the targeted keywords before it appears in chats.

Before you ask: yes, there are definitely some users that will try and find a workaround these filters. To that end, AutoMod will also introduce a feature called Wildcards. Mods can specify particular words or phrases to be detected when they appear in the beginning, middle, or end of other words by using the “*” wildcard character in certain areas surrounding a word or phrase after setting up Custom Keyword Rules.

Earlier this month, Discord introduced a feature called Text Chat in Voice Channels that added a standalone text-based chat room for voice channels. With AutoMod, the AI-driven moderator can also now inspect the server’s written conversations in voice channels for particular keywords, phrases, or links to malware, which will be blocked and sent as an alert.

AutoMod is already available On Windows, macOS, Linux, iOS, Android, and its web app. On another note, the wordlists of Commonly Flagged Words are available in English only, and the messaging app did not say when it plans on making the feature available in other languages.

Najlaa Aina contributed to this article.