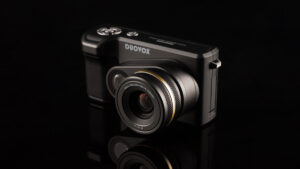 Duovox is a brand name that even those familiar with the imaging industry may have never heard of. This is mostly due to the fact that it mainly covers a very particular niche: dashboard cameras with sensitive low-light image capture capabilities. However, the company recently made headlines with its latest product, the Duovox Mate Pro digital camera, which promises the ability to record full-colour photos and videos in near-complete darkness.

The camera’s impressive feat is made possible by its onboard 1/1.8-inch Sony STARVIS 2 back-illuminated CMOS sensor, which is designed mainly for security devices. Being tailored specifically for low-light capture, the Duovox Mate Pro (like the company’s other products) caters towards a niche audience, namely nighttime adventurers, campers, and wildlife observers. Duovox says it aims to have its latest product to “replace traditional black-and-white infrared night vision devices.”

Based on the samples provided by the company, the Mate Pro low-light image quality is certainly noteworthy, especially when it comes to colour and detail preservation. However, its capabilities do exhibit the usual flaws such as featuring heavy amounts of noise and visible artefacts. Nevertheless, the outcome is still very impressive, considering that these samples were taken in near-pitch darkness. That being said, there’s no doubt that the pictures or videos shot by the camera would be easily mistaken for daytime shots at first glance by many.

The Duovox Mate Pro features a plastic body measuring at 4.5-inches wide, 3-inches in depth, and 2.125-inches tall. Situated on top of the device is an assortment of buttons for power, photo/video capture and interface navigation, whereas on its back is a 3-inch 1.2M-dot LCD touchscreen. Additionally, found on the side is a USB-C port and microSD slot that supports up to 512GB of storage. As to whether the camera is water-resistant or not, Duovox’s FAQ claims that it seems to be the case, but advises users to not use it underwater or in rainy conditions.

The Mate Pro comes with a non-removable 3,000mAh battery that can last up to four hours of usage, and takes around 120 minutes to fully charge via USB-C. Besides that, it also features a variety of shooting modes such as PC Webcam functionality, live streaming, motion detection activated video recording, timelapse, and more. As for file formats, the camera captures photos in jpeg and RAW, while videos are recorded in either mp4 or H.264 modes.

The Duovox Mate Pro is currently being funded through Kickstarter until late May, and is expected to ship out to backers by October 2022. Backers pledging from US$ 599 (~RM 2,534) are entitled to receive a basic package of the camera, whereas those pledging at US$ 699 (~RM 2,957) or more will receive a larger bundle which consists of a single Mate Pro unit, strap, car mount, protective case, 128GB SD card, SD card reader, tripod, user manual, and 1-year warranty.