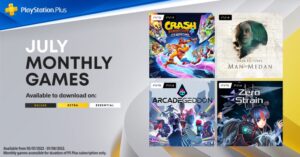 As July approaches, we finally get an announcement by PlayStation Asia regarding the free games that PS Plus subscribers will get. It looks to be another month of the Asia region getting four games. But the headline of this lineup is also a pretty big one.

It’s probably of little doubt that the biggest game coming to PS Plus subscribers in July is Crash Bandicoot 4: It’s About Time. Releasing 22 years after the last entry in the series, it’s definitely one to pick up if you enjoyed the original trilogy. The promise of more platforming levels is probably what you’re after in this game, but if you’re someone who enjoyed the plot of the game, the one in this takes place immediately after the events of the previous one.

Also on the list of free games for PS Plus subscribers is The Dark Pictures Anthology: Man of Medan. The game is inspired by the urban legend of the ghost ship known as the SS Ourang Medan, with the title being a play on the name. You play five people in an interactive drama, deciding if they should follow their “head” or “heart”. It supports multiplayer too, which is interesting for a game of this type.

The third free game for PS Plus subscribers in July is Arcadegeddon. This is a strange one, being a multiplayer shooter with a mix of PvE and PvP, with a wacky premise to go with it. But more importantly, the game is currently in early access, and will only officially be released on 8 July. But as a PS Plus subscriber, you can get this game three days early.

Last on the list of free games for PS Plus subscribers is Zero Strain, which is also only free for the Asia region. It’s a bullet hell shooter despite the way the cover art looks, with a number of different ships to play with.

Say hello to your PlayStation Plus Monthly Games for July:

All of these games will be downloadable between 5 July and 1 August. If you’ve not yet downloaded the free games for the month of June, now’s the time to do so.