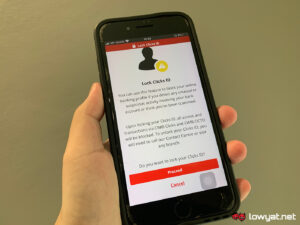 CIMB has announced a new “kill switch” security feature called Lock Clicks ID, which aims to let its customers have the power to immediately freeze or suspend their accounts if they suspect any unusual or fraudulent activity or in the extreme event that the accounts have been compromised.

The Lock Clicks ID feature is available on both the old CIMB Clicks app as well as the CIMB OCTO app on iOS, Android, and Huawei, effective 16 January, so make sure to keep these apps updated with the latest version. CIMB says that the kill switch is in line with Bank Negara Malaysia’s direction on additional measures to strengthen banking security.

To use the kill switch, you must log into the Clicks or OCTO app, go to Services > Clicks Profile > Lock Clicks ID > Proceed. Users will then need to approve the measure through SecureTAC authentication which will then lead to an acknowledgement page of the move.

Once Lock Clicks ID has been activated, users will automatically be logged out of the account and nobody will be able to log back in or perform any outgoing transactions. To unfreeze your account afterwards, you must either call the CIMB Contact Centre or visit any CIMB branch to have your account back to normal.

Once you unlock your account, you may access it again using your existing credentials, although the bank encourages you to change your password after such an event. Effendy Shahul Hamid, CEO of Group Consumer & Digital Banking of CIMB said, “We are pleased to be the first bank in Malaysia to empower customers by enabling them to immediately freeze their digital profile entirely in-app, whilst allowing them to still operate their accounts at ATMs or branches”.

Other recent security upgrades made by the bank in recent months include a single registered device for authentication, call verification for first-time logins, and SecureTAC authorisation for transactions of RM100 and above. Last month, OCBC also introduced a kill switch feature for compromised accounts, but unlike CIMB’s, it can only be activated by calling the bank’s contact centre.