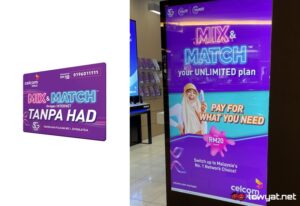 Celcom Xpax prepaid customers are now able to customize their own plan through a new feature that has just been implemented by the telco called Mix & Match. Available from today onwards, the customisation can be performed through the Celcom Life app.

According to the telco, the customisation process begins by selecting the validity period that the customer prefers which ranges from five to 30 days. At this stage, they also can choose whether they want to have a data quota or unlimited Internet.

By choosing data quota, they are able to utilize the Internet at the maximum speed that Celcom 4G or 5G network can provide in their area. If they opt for the unlimited Internet instead, the speed will be between 3Mbps to 6Mbps while there is also a FUP limit of 20GB to 60GB depending on their choice of the unlimited tier and validity period.

Once the customer has reached their FUP limit, their data speed will be throttled to 512KBps. Here is the breakdown of the pricing for the first stage of Xpax’s Mix & Match customisation process which Celcom refers to as the Primary Plan:

Once the customer has sorted out their Primary Plan, they can then choose their optional Add-On items which cover unlimited voice calls, additional high-speed Internet quota, and hotspot quota. In addition to that, customers can also add a dedicated data quota for selected apps including TikTok, Instagram, Facebook, iQIYI, YouTube, Netflix, Viu, PUBG, and Mobile Legends Bang Bang.

Here is the price breakdown for the Add-On items, according to Celcom:

Exclusive to those that opted for 30 days of validity for their customised Xpax plan, they can also add Viu Premium Access and iQIYI VIP Access into their subscription list for RM5 each. They can get discounted in-app game credits for PUBG and Garena too but the telco somehow has yet to provide the full details regarding this particular part of the Xpax’s Mix & Match feature.

In case you are confused, here is an example provided by the telco which uses 30 days validity period, 8GB of high-speed data, and unlimited voice call which costs RM23 per month:

Readily available for all Xpax customers with SIM cards that are active since 7 October 2021, do note that the new Mix & Match customised plan does not come with an auto-renewal option. As always, we do recommend you to go through the plan’s FAQs as well as its Terms and Conditions document before committing to it, so that you are well aware of what you are signing up for.