ASUS expanded its graphics cards lineup with the addition of its own custom-cooled NVIDIA’s GeForce RTX 3080 12GB graphics cards. Featuring 2GB GDDR6X more than the original RTX 3080 that launched last year, ASUS is releasing the card under two of its sub-brandings: the ROG Strix series and TUF Gaming Series.

Starting with the TUF Gaming series, ASUS will be releasing two versions of the card, an OC edition and standard, non-OC edition. In terms of clockspeeds, the non-OC edition will have a gaming mode and OC mode boost clock of 1710MHz and 1740MHz, respectively. While the boost clocks of the TUF Gaming OC edition of the RTX 3080 is set at 1785MHz for its gaming mode and 1815MHz for its OC Mode. For cooling, the card sports a 0dB triple-fan cooling solution, powered by Axial-tech fans nestled on top of a 2.7-slot thick heatsink. 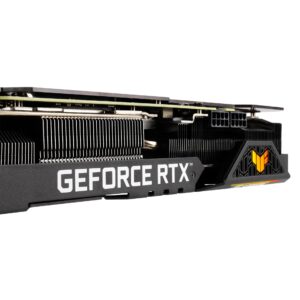 As for the ROG Strix version of the RTX 3080 12GB, it seems that ASUS is only bringing in the OC edition of the card. In terms of speed, the card will be running on a gaming mode boost clock of 1860MHz and an OC mode boost clock of 1890MHz. Like the TUF Gaming series, the cooling solution of the ROG Strix series RTX 3080 12GB comprises a triple 0dB, Axial-tech fan solutions, but with a slightly thicker 2.9-slot heatsink sandwiched between the fans and PCB. Further, its cooler shroud is cloaked with an aRGB LED across the length of the card.