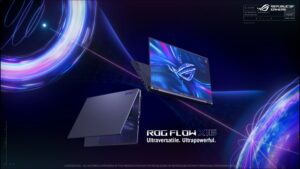 Since the launch of its Flow laptop series, ASUS’ new thin, light, and ultraportable lineup has released two machines: the convertible 2-in-1 X13, and the more recently announced Z13. Today, the company is expanding the family with the addition of the Flow X16.

Like the X13, the X16 a 2-in-1 convertible gaming laptop, designed to be versatile and portable, along with some plus-sized features. To address the more obvious points, the laptop basically a bigger version than its predecessor, sporting a 16-inch inch chassis, along with a brand new display to boot. Specifically, the display is a 16-inch Mini LED panel which is part of ASUS’ ROG Nebula HDR display offering, that also sports an aspect ratio of 16:10. Which translates as more screen real estate per inch. Due to its Mini LED nature, the display can also boast 512 dimming zones, as well as a peak brightness of 1100 nits and 100% DCI-P3 colour accuracy.

Beneath the hood, the Flow X16 is rocking an AMD Ryzen 9 6900HS CPU, while the top-tier variant of the laptop houses can house an NVIDIA GeForce RTX 3070 Ti with a maximum TGP of 125W, as well as support for MUX Switch. Needless to say, gaming on this laptop will require more than the standard 100W USB-C charger, to which ASUS had told us that the Flow X16 will come with its own dedicated 240W charger.

Keeping the X16’s major components cool is a combination of Liquid Metal paste, courtesy of Thermal Grizzly, slathered on top of CPU and GPU, and ASUS’ ROG Intelligent Cooling that is its Frost Force Technology with Pulsar Heatsink.

Again, because it is a convertible laptop, the X16 is capable of transforming into one of four modes: the basic laptop mode, Tent mode, Stand Mode, and Tablet Mode. And before you ask: yes, it will support XG Mobile eGPUs,

Powering the X16 is a large 90WHr battery that supports fast-charging and is capable of recharging the battery from 0% to 50% in just 30 minutes. When close, the X16 has a thickness of just 19.4mm. The only caveat about this laptop is, because of its increased size over the other two entries, it weighs 2kg.

At the time of writing, ASUS did not provide local pricing or availability.