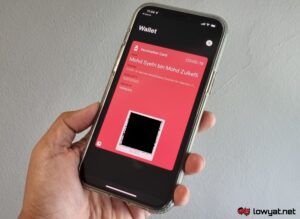 Aside from allowing users to utilise Face ID without the need to remove their face mask, the iOS 15.4 update which made its way to users last month also allows Apple Health and Apple Wallet to support the EU Digital COVID Certificate format. We then subsequently learned that iOS 15.4 also recognises the vaccination records inside MySejahtera.

While the reason for this was never explained by the authorities, we believe the QR format that MySejahtera’s Digital Certificate of COVID-19 Vaccination used was based on the EU format. However, users were only able to add the records to Apple Health at that time but things have now changed just days after the EU announced Malaysia’s enrollment into its Digital COVID Certificate system.

First reported by SoyaCincau, Apple Wallet is now able to support MySejahtera vaccination records as well. If you have already added them to Apple Health, all you need to do is just go back to those records and press the Add To Wallet option which should be already enabled for you.

If you haven’t done so before, just scan the QR code inside MySejahtera’s Digital Certificate or its PDF/printed equivalent using your iPhone camera. The Add to Wallet and Health screen should then appear together with your personal information and vaccine records.

You may also screenshot the certificate and then scan for the QR code using the Live Text feature inside the Photos app although this can only be done using iPhone Xs and newer models. As mentioned earlier, the support for the EU Digital COVID Certificate format was delivered through iOS 15.4, so naturally, your iPhone has to be up-to-date as well.