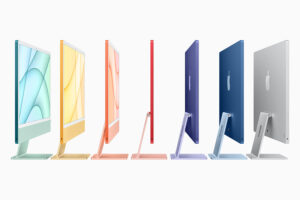 Apple is expected to complete its transition for its Macs from Intel chips to its own in-house Apple Silicon chips this year. Beyond that, Bloomberg’s Mark Gurman claims that the company is already working on revamping the iMac with a new M3 chip.

According to Gurman, an iMac fitted with an M3 is due to be released at the end of next year at the earliest. Other than that, he also predicts that Apple will eventually launch a new MacBook Air, MacBook Pro, and Mac mini with an M2 chip, which he previously said would be unveiled later this year.

Moreover, Gurman says that Apple’s M2 chip series will also include an M2 Pro and M2 Max for new 14-inch and 16-inch MacBook Pros, as well as a dual M2 Ultra chip for a new Mac Pro.

Just last month, Apple released the Mac Studio, a Mac mini with a much thicker heatsink equipped with two stitched-up M1 Max chips called the M1 Ultra. This June, the company will be holding its annual Worldwide Developers Conference (WWDC) where it will reveal new major software updates for its devices. Gurman expects Apple to unveil a new Mac Pro and iMac Pro at the event, but as these things go, nothing concrete has been confirmed yet by the fruit company.

The post Apple Is Reportedly Working On An iMac With M3 Chip appeared first on Lowyat.NET.