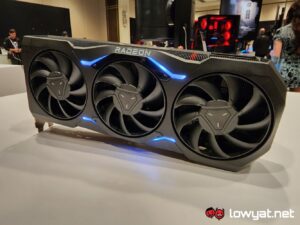 Last week, we covered the launch of AMD’s RDNA3 GPU architecture and the official launch of its Radeon RX 7900 XTX and XT graphics cards. And while we did conduct a hands-on for them, we confessedly did miss one or two features about the cards, chief among them being the built-in ambient temperature sensor behind their fans.

The discovery of the sensor, also called a thermistor, within the reference Radeon RX 7900 Series cards was made by Gamers Nexus’ own Steve Burke, who was also present at the inaugural launch of the cards. It essentially allows a graphics card to keep track of its ambient temperature, inside a case. While it is not a groundbreaking piece of technology, by any measure of the term, it is helpful to have present with cards that also have zero RPM or 0dB technology installed.

As pointed out by Videocardz, the absence of such a sensor effectively means that other components paired with the GPU, such as the VRMs and capacitors on the PCB, would be more prone to overheating and, as a result, may lead to them burning out and ultimately killing the card. A prime example of this would be EVGA’s GeForce GTX 10 Series GPUs, whose cards actually lack such sensors and ultimately cause many components to overheat.

Having said that, AMD did not outright specify if its AIB partners will be implementing a thermistor into their own custom boards, but at this point, it seems more an outright likelihood than speculation. As for its reference Radeon RX 7900 XTX and XT cards, the results captured by the sensor may be represented via official software and more specifically, through its Adrenalin Software platform. Although, the CPU and GPU maker still hasn’t made any comments on the matter.