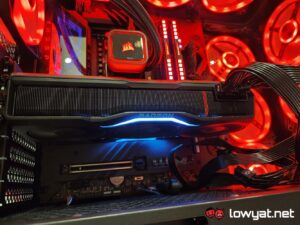 AMD’s Radeon RX 7900 Series graphics cards are now official and while the brand is still unable to share a great deal of detail about the card, AMD was kind enough to give us a chance to hold and feel its flagship cards in the flesh. Like all graphics cards, they weren’t the lightest of components but at the same time, they weren’t as chonky or heavyset as its rival’s current top-tier graphics card.

The reason why this is the case with the Radeon RX 7900 Series cards is actually a part of AMD’s decision-making process: rather than create a cooling solution that is bigger than the sum of its part, the CPU and GPU maker decided that it didn’t want to put its customer base in a situation where they would need to either replace their casing or PSU. Hence, both the XTX and XT variants of the series are more or less the same size as its Radeon 6000 Series predecessors.

Another mainstay for the Radeon RX 7900 Series is its source of power. It’s a standard dual 8-pin PCIe power port on both cards and believe me when I tell you, AMD had no qualms about taking potshots at NVIDIA’s own decision to use an entirely new 16-pin PCIe Gen5, or 12VHPWR connectors, in order to power up its GeForce RTX 40 Series graphics cards. Again, this decision was based on the general concept of plug-and-play, and in AMD’s mindset, the last thing it would want is to make things slightly more complicated for the masses.

Getting back to the reference cooler design that is being employed for both the Radeon RX 7900 XTX and XT, in a sense, it actually doesn’t stray very far from what AMD did with its RDNA2-powered graphics cards. As with all top-tier air-cooled cards, you get the usual triple-fan configuration only this time around, there’s less barebone metal to be seen and more of a matte black motif that encapsulates the whole card. To that end, the backplate looks, as one fan described it, like someone in AMD just couldn’t profess his love for the Dodge Charger enough.

RGB LEDs and their presence on the Radeon RX 7900 Series cards have also been redesigned and repositioned, with the diffused LEDs not noticeably placed around the cooling solution’s middle fan. Granted, the lighting we saw on it while running inside a full-sized PC was static but the folks on the demo floor did tell us that they could be customised to run all the colours of the rainbow, and then some.

On another note, the colour red on the Radeon RX 7900 Series graphics cards is not so garish as its predecessor. This round, that bright, bold, primary colour has been limited to just a minimalist three-line accent at the top of the heatsink, along with the dots that are strategically placed along the backplate.

Along the back, you’ll find the two DisplayPort 2.1 ports, the HDMI 2.1a port, and USB-C port capable of supporting DisplayPort 2.1. As a quick recap, those display standards mean that both the Radeon RX 7900 XTX and XT are capable of running at 8K resolution, which at this stage still feels more of a gimmick rather than an everyday standard.

As for how the both the Radeon RX 7900 XTX and XT performs, I’m afraid you’re going to have to wait a little while longer before we can officially tell you that. Even on the AMD demo floor, all the games that were running off the cards were framelocked to 60 fps but if it is any consolation, these titles were all running at their highest graphics presets and at 4K resolutions.

The AMD Radeon RX 7900 Series graphics cards are slated to for availability on 13 December 2022.