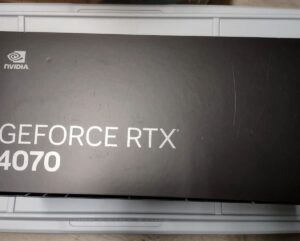 YouTuber RedGamingTech recently shared images of what is supposedly the box and packaging of the unreleased NVIDIA GeForce RTX 4070 Founders Edition (FE). The picture itself doesn’t contain any evidence of the card, but it does serve as soft confirmation that the GPU brand is planning on bringing back its reference design for its RTX 40 Series cards.

If the image of the RTX4070 FE is genuine, then NVIDIA’s move is a little surprising, given that it chose not to release a Founders Edition of the RTX 4070 Ti, simply leaving its cooling solutions to the mercy of its AIB partners. Again, it is just an image of its packaging, so we don’t really know how and or what the finished product will actually look like.

That being said, and if the process of speculation continues to be applied, NVIDIA could very slightly tweak the design of the RTX 4070 FE to look similar to what it did with the RTX 3070 Ti FE, where it returned to form with the inverted Dual Axis Flowthrough design.

Another topic of discussion by RedGamingTech was the possible GPU that would be fitted inside the RTX 4070 FE. In theory, the GPU could use either an AD104-250 or AD104-251 GPU, sporting 12GB GDDR6X graphics memory, and a 192-bit memory bus. While these internal specifications sound nearly identical to its more powerful Ti sibling, the discerning factor for this card would that it is only expected to have 5888 CUDA cores.

On the subject of the GPU, the well-known hardware leakster Kopite7kimi (@kopite7kimi) chimed in on RedGamingTech’s tweet, saying that another unannounced NVIDIA GPU, the RTX 4060 Ti, would also be using the same FE cooler shroud as the RTX 4070 FE.

In one snapshot, the inside of the packaging of the RTX 4070 FE confirmed that the card would require a 2x 8-pin to 1x 16-pin power adapter to run, and that it will be 112mm wide. In contrast, the RTX 4080 FE and 4090 FE both have a width of 140mm, meaning that the next mid-range graphics card is clearly going to be considerably smaller.

Congratulations!
RTX 4060 Ti FE can also use this cooler.

As for when we could expect the RTX 4070 FE, the latest information points to the AD140-250’s mass production all prepped for the second half of next month, meaning we could see review units of the card just before that, and market availability for it happening just a few weeks after launch.