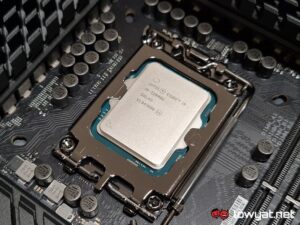 Benchmark details supposedly belonging to a yet unreleased Intel 13th generation Raptor Lake CPU have made their way online. The details were discovered by hardware enthusiast Komachi_Ensaka, whose sleuthing led them to a results page on BAPCo.

To be clear, the Raptor Lake CPU in question is simply labelled as “Genuine Intel 0000” on the BAPCo Crossmark software results page, so it is still unclear as to which model the processor is, exactly. What is known, though, is that the CPU is wielding a generous 24-cores and 32-threads, although we’re fairly certain that the number of cores is a typo. If you’re wondering about the core-to-thread configuration, that’s because the CPU follows the same layout as Alder Lake, which introduced the use of Golden Cove (P-Cores) and Gracemont (E-Cores) cores to the masses. To provide some context, its top-of-the-line model, the Core i9-12900K runs on a 16-cores, 24-threads layout.

For that matter, it is likely that the mysterious Raptor Lake CPU could be rocking a higher number of E-Cores than P-Cores which, again, would be more in line with rumours that Intel is increasing the number of E-Cores for its 13th generation Core lineup. In which case, the CPU in question could actually be an 8P+16E configuration.

Core count notwithstanding, what is surprising is the performance of the Raptor Lake CPU with BAPCo’s benchmarking software. Compared to the 12900K, the processor lags behind the top-tier Alder Lake CPU by nearly 50%, while AMD’s Ryzen 9 5950X also pulls ahead of it, albeit by a much smaller margin. Of course, it goes without saying that, as an engineering sample, the 13th generation CPU is clearly not optimised yet and that we can definitely expect these numbers to increase and become faster than Intel’s current CPU generation.

Intel’s 13th generation Raptor Lake CPUs are expected to launch sometime during the fourth quarter of 2022. Like Alder Lake, the CPU lineup will be based on the Intel 7 process, support LGA1700 socket, and be available for both desktop and mobile. That, and it will support DDR5 RAM and PCIe 5.0.