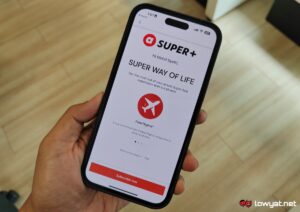 Back in March, AirAsia launched a subscription service called Super+ that provides unlimited flights in Malaysia and across the ASEAN region as one of its main attractions. Fast forward to today, the service has been revamped to include long-haul flights from AirAsia X.

Instead of just a single option, the AirAsia Super+ subscription service has now been divided into two. The first which is called the Super+ Lite is the closest to the original iteration and promises unlimited flights to destinations across Southeast Asia.

That being said, the new Lite option is now priced much higher at RM888 per year. As a comparison, the original Super+ subscription costs RM639 which is a noticeable difference of RM249.

As for the long-haul AirAsia X flights, they have been put into the Super+ Premium option which comes with a price tag of RM2,288 per year. Each option also includes additional perks such as unlimited 5% discounts on hotels available via the AirAsia platform.

AirAsia Super+ subscribers are also able to obtain 10% discounts on AirAsia Ride service in Malaysia, Indonesia, and Thailand. That being said, the discount on the AirAsia Ride is capped at RM2 in Malaysia while it is also capped at THB16 (~RM2.02) in Thailand and IDR6,500 (~RM1.84) in Indonesia.

Not to forget, Super+ Lite and Premium customers would also receive 800 and 2,000 AirAsia points, respectively. However, the original bonus perks such as COVID-19 insurance coverage, and free delivery on food orders no longer available with the newly revamped Super+ offerings.

Quite a number of policies from the original Super+ service have been retained for the revamp. Among them includes three no-shows limit, a 14-day advanced booking requirement, and no bookings for selected embargo periods.

While Super+ subscribers are able to book their flights from today onwards, the date for the flights starts from 1 January 2023. Unlike the original Super+ version from earlier this year, AirAsia did not announce any customer limit or purchase deadline for the revamped options but nevertheless, the CEO of Capital A, Tony Fernandes at the launch event today noted that the offering would not be made available forever.

The announcement of the newly revamped Super+ subscription service seemed rather timely, as Capital A has recently revealed its plan to offload the company’s aviation businesses which includes AirAsia Malaysia, Thailand, Indonesia, and the Philippines to AirAsia X. If the plan goes through, it will result in the creation of a new consolidated aviation group and may also help elevate both Capital A and AirAsia X out of their current PN17 classification by Bursa Malaysia.

The post AirAsia Revamps Super Plus Unlimited Plan To Include Long-Haul Flights: Now Starts At RM888 appeared first on Lowyat.NET.