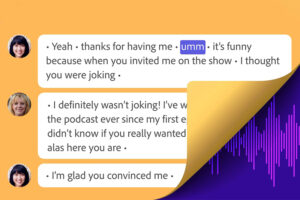 Adobe is testing out a new audio tool called Project Shasta that is meant to make audio editing easier for podcasts. The web-based tool uses AI to automatically make transcriptions of your recordings, and lets you edit the audio by deleting words.

In addition, it also provides a number of features including audio quality checks and remote recording. You can record with other people online as well by sending them an invite link. This multi-user recording feature comes with the ability to start and stop recording, and even sync up everyone’s audio if somebody has a bad connection – thanks to the tool’s onboard AI.

Other than that, there’s a noise removal filter in case somebody is talking in a loud environment, which removes all the background noise and enhances the person’s voice. You can even add music anywhere in the recording as well as in the background.

Some features that are listed as “coming soon” include a word filter that automatically remove filler words or sounds such as “um” or “uh”. Lastly, there also seems to be a teaser of 3D audio but there’s no explanation of that just yet. Adobe Project Shasta is currently free, but you need to sign up for the waitlist to be a tester.

According to Mark Webster, Adobe’s director of audio, Project Shasta is still in the early Alpha phase and is looking for user feedback. It initially only supports English, and there’s no date on when it will be widely available.