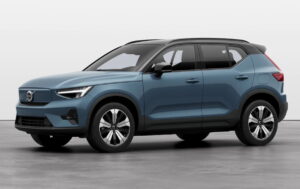 The Volvo XC40 Recharge Pure Electric SUV officially made its way to Malaysia earlier this year as not only the Swedish marque’s first all-electric offering in our market but also as the first-ever locally-assembled EV. The SUV received quite a response from our market to the extent that Volvo Car Malaysia (VCM) has to stop accepting orders for it in May after it received bookings of more than 400 units.

As noted in our report back then, customers that placed their orders from that point onwards will receive the 2023 model instead although the exact pricing for the updated version was not revealed at that time. It is only today that VCM has finally announced the availability of the refreshed XC40 Recharge Pure Electric for Malaysia.

Let’s start with the biggest difference between both models: pricing. Its predecessor was rolled into Malaysia with a price tag of RM262,460 but the 2023 edition costs much higher at RM278,888.

In terms of exterior, the 2023 XC40 Recharge comes with a new front bumper design that is similar to the one that Volvo has implemented on the car’s sportier cousin, the C40 Recharge. The 2023 model has also been provided with a new dual-tone 5-double spoke design for its 19-inch wheels.

On top of that, the refreshed model also comes in a new colour option called Fjord Blue alongside existing colourways such as the Black Stone, Thunder Grey, Crystal White, and Sage Green. The 2023 edition also features interiors with Charcoal Connect Suede textile and Microtech inserts while its sculpted gear-free is now leather-free as well.

Not to forget, owners can also remotely activate the EV’s PM2.5 air purifier to perform pre-cleaning before they enter the car and Volvo has also provided the SUV with an updated Foot Movement Detection Module for a smoother handsfree experience for opening or closing its tailgate.  In terms of performance figures, the 2023 XC40 Pure Electric is generally similar to the 2022 model though.

The Malaysian variant comes standard with a 300kW dual-motor all-wheel-drive setup that is equivalent to 408hp and can deliver up to 660Nm of torque alongside a top speed of 180km/h. Still equipped with a 78kWh battery, the 2023 edition has a slightly higher WLTP range of 438km although not by much considering that its predecessor was rated at 418km.

When it comes to charging time, the 2023 XC40 Recharge Pure Electric takes around 28 minutes to go from 10% to 80% when charged using 150kW DC fast charger via its CCS2 port. With a 50kW DC charger, the charging time would then increase to 60 minutes and on the other hand, it would take around 8 hours to get the car fully charged from empty when using an 11kW AC charger.

If you want to give the newly refreshed XC40 Recharge Pure Electric or its hybrid counterparts a try, do reach out to the nearest authorised Volvo dealer or you can also book a test drive session directly via VCM’s official website. You can place a booking and customise your unit through the website as well.